Two great blogs about the relationship between author and reader floated across my screen today: The first by the always brilliant John Scalzi – How to Be a Good Fan The second by Brenna Clarke Gray over at BookRiot – Readers Don’t Owe Authors Sh*t For my part I’ve not been doing this long enough, and haven’t quite the volume of feedback to have a sense of my relationship with those fans I have. As an author, all I can say thus far is that I get a few nice comments and emails on this blog, Twitter and Facebook every now and then, and my interactions with those commenters always make my day that bit nicer. As a fan, of all sorts of stuff – I am basically fannish, I have the fan gene, I fan therefore I am – I just try not to be a dick. I mean, I went to watch them film Doctor Who the other day; didn’t vault the barrier, shout out to get the actors’ attention, or refuse to put away my camera when I was asked nicely. I don’t go up to famous people on the street if I recognise them, figuring that they’re on their own time – and working where I do, I regularly pass very famous folk on my wanderings, some of whom I really would like to get an autograph from. But at conventions I reckon they’re on duty, so to speak, and have been known to go and introduce myself and diffidently fawn a bit. Most regularly, though, I’ll tweet something nice at an author, musician or... END_OF_DOCUMENT_TOKEN_TO_BE_REPLACED 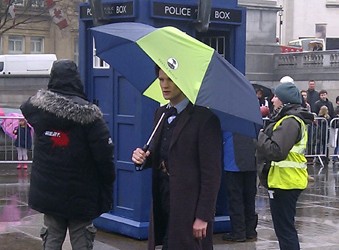 Picture the scene… I’m standing in Trafalgar Square watching them film the Doctor Who 50th Anniversary Special. I’m standing behind a barrier watching Matt Smith and Jenna-Louise Coleman filming a scene. There are other members of the public here taking pics and a good-natured, smiley guard on the opposite side of the barrier to make sure we don’t get in the way. One of the crew comes up to the guard and tells him that some paparazzi are being aggressive to members of the public by the steps to The National Gallery. Smiley guard goes  with police officer to tell them off – there are children here, after all. Result: the paps come and stand on either side of me. They talk over my head. Here is an exact transcript of their conversation, with no addition or embellishment: Pap 1: Thing is, I f***ing hate Doctor Who. F***ing rubbish. Wouldn’t f***ing watch it if you f***ing paid me. Pap 2: The bird’s nice looking though. Pap1: Yeah. (Pointing at smiley guard) He’s a funny c*** inne. Pap 2: Yeah, weird c***. Pap 1: (Addressing smiley guard) Oi! You shouldn’t let this lot in here (indicates public). Should just be paps. Smiley guard: (Smiling) Well, your photos aren’t gonna be worth nothing once this lot have put theirs up on Twitter. (Wanders off smiling). One-nil to smiley guard, I reckon. Meanwhile, in front of us, Matt Smith earned his wages like nobody’s business. Don’t believe me? Check this out!... END_OF_DOCUMENT_TOKEN_TO_BE_REPLACED

So Margaret Thatcher died. For those who don’t know who she was, she was British Prime Minister during my youth and did a lot of things that were extremely controversial. And that’s all I’m saying about it. Why? Two reasons. First, I work for the Government in my 9-5 job at the moment, so I’m not really allowed to say anything overtly political – it could get me fired. I really can’t afford to get fired. But more importantly, I try very hard to use my online presence to only put out positivity. And engaging with Thatcher’s legacy in any way shape or form is going to offend at least half of my potential readership a whole heck of a lot. Not that I’m unwilling to offend. Sometimes I think it’s very necessary. But most of the time, what would be the point? Increasingly I tend towards the view that people only read articles that they expect will reflect their views. Very few people are willing – or able – to seek out viewpoints that differ from their basic kneejerk reactions, consider them carefully and thoughtfully, and decide to either reject them anew or, perhaps, to amend their views somewhat if they were persuaded. So those who hated her and everything she stood for have articles like Russell Brand’s piece on Thatcher to read. And those who loved what she stood for and cherish her memory can enjoy David Cameron’s eulogy. I have very strong opinions indeed about her. VERY strong. My close friends know what I think. But I don’t for one second flatter myself that anybody else is interested. And even if... END_OF_DOCUMENT_TOKEN_TO_BE_REPLACED 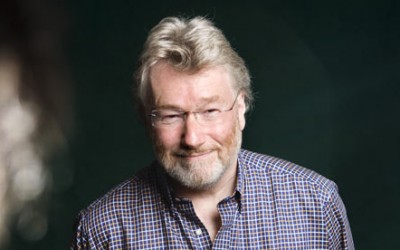 The first Iain Banks book I read was The Wasp Factory. I knew I was going to enjoy it, so I put it aside as a reward for finishing my finals at University. It sat on my shelf, a deferred pleasure. I remember the circumstances of reading it vividly – I had been to our graduation ball and, unable to sleep after a very drunken, flirty evening, I collapsed on my bed and picked up the book. I didn’t sleep that night at all. I devoured that story and, still awake at 6am, I went for a walk in the early morning mists, my head swimming with excitement about my future, and the strange, dislocated sense of formless dread that Banks had conjured in me. “Come outside,” the book seemed to say, “the world is far, far weirder than you could possibly imagine…” Looking back on that moment of transition, it feels almost as if it was Banks himself who ushered me out of adolescence into the wider world with a warm but slightly ghoulish grin of amused invitation. I read The Crow Road in one sitting, too, in an attic bedsit in Brussels where I hid from the menagerie of freaks who shared the house with me – the mad, snaggle-toothed landlady, her grotesquely fat son who read books about nineteenth century post codes, the alcoholic Aussie tennis coach, and the Irish girl across the hall, who I loved with a fervent, unrequited passion – they swim in and out of Gallanach in my muddled memories, no more real than Uncle Rory, Prentice, Ashley and the rest. Two... END_OF_DOCUMENT_TOKEN_TO_BE_REPLACED 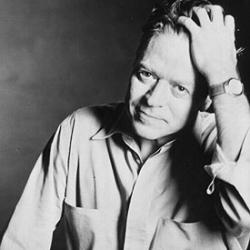 From the archives: Robert Palmer

In December 2002 I was working for the BBC’s Top of The Pops website. Mostly I wrote silly pieces of content, like Top 5 Most Depressing Depeche Mode Lyrics, or the three news stories that the site used to publish every day. But then I was asked if I’d like to do some interviews, and I jumped at the chance. My first interviewee was Robert Palmer.  I knew who he was, of course, but I wasn’t a particular fan or an expert, so I was not only worried about stuffing up the interview technique, but also about being revealed as a know-nothing charlatan. So I did my research. I spent a whole day tracking down and reading every single profile, article and interview I could find online and making lots of notes. I noticed one thing – the interviewers rarely asked him about music. Fashion, videos, the industry, his career, his private life – but rarely ever music. And the one or two times a musical question slipped through the net I thought I sensed flickers of interest from Palmer that the rest of the interviews lacked. So I decided I would make music the focus of my interview. It felt like a gamble, but it seemed logical to me. I presented myself at the Landmark Hotel in Marylebone – a very upmarket hotel that was kind of intimidating to me. Mr Palmer arrived with a spin of PR folks. I was his first interview in a day set aside solely for him to talk to the press. It was clearly going to be long day for him – he was professional... END_OF_DOCUMENT_TOKEN_TO_BE_REPLACED

I’m beginning to see a theme emerging in the various discussions taking place about the future – specifically, the changing nature of the interaction between individuals and organisations, be they commercial or social. Two TED talks I have watched in the last week both articulate the same thought, and bring the theme into sharp relief. Both are very worth your time. Sugata Mitra: Build a School in the Cloud A brilliant, funny, inspiring mashup of history, science and pedagogy. “It’s not about making learning happen, it’s about letting it happen” Amanda Palmer: The art of asking I backed her Kickstarter, and although I remain agnostic in some respects, her contribution to the conversation is invaluable. Plus, crucially, her album kicks ass. “I think people have been obsessed with the wrong question, which is how do we make people pay for music. What if we started asking, how do we let people pay for... END_OF_DOCUMENT_TOKEN_TO_BE_REPLACED

In January 2013, to mark the launch of School’s Out Forever, Simone Thorogood interviewed me for Loaded’s late night book show – my first TV appearance (as an... END_OF_DOCUMENT_TOKEN_TO_BE_REPLACED

So 2012 was a hell of a year for me, personally. I started the year two stone overweight, in financial freefall and actually pretty much depressed. I had no writing gigs lined up, was struggling to find any joy in my day job and generally felt like things were Not Going My Way. But did I wallow and fester in misery? Yes. Yes, I did. A bit. But not for long!* The start of 2013 finds me two stone lighter, black dog free, with a new day job, a new accountant and much smaller debts. I’m also a teetotal gym-bunny, which my younger self is finding deeply upsetting, but my 41 year old self is finding oddly satisfying. I would like to stress that this IN NO WAY constitutes any kind of mid-life crisis. Anybody suggesting such a thing will get a slap (from my now finely toned, oh so youthful arm, which, now I think about it, would probably look great draped around the shoulders of, say, a smouldering young secretary in the front seat of  a red ferrari, y’know, the kind that goes VROOOOM!) So aside from sorting myself out personally, what have I achieved on the writing front this year? Stuff I started AND finished I needed to get myself back into the routine of writing after taking 2011 off (except for a short story and some work on a computer game). Happily, in January Abaddon asked me to write a novella for them, and I used it to ease myself gently back into the swing of things. When it comes to completed projects I can... END_OF_DOCUMENT_TOKEN_TO_BE_REPLACED

In 2004 I made my acting debut for Big Finish. Well, I say ‘acting’ I was playing a news reader, so it was hardly Hamlet. I remember trying to be very naturalistic and being told by the director to make it a bit more ‘Day Today’, so I made it hammier and that got the thumbs up. I must have done something right, as I came back again in another play as the same news reader – only to get blown up! Anyway, it was a huge privilege to be in the same play as the late and much lamented Nicholas Courtney, who played Brigadier Alistair Gordon Lethbridge-Stewart on Doctor Who and its spin-offs for so many years. And you can hear the whole thing in the embed below courtesy of Big... END_OF_DOCUMENT_TOKEN_TO_BE_REPLACED
« Older Entries
Next Entries »