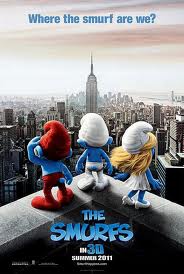 There are certain tropes that those of us of a certain age (cough…40ish…cough) were conditioned to expect in comedies and children’s films.

The evil boss who gets their comeuppance at the end of the film, when the downbeaten hero realises they don’t have to put up with it and can Follow Their Dream instead, is perhaps the most familiar. You know the schtick, I don’t have to quote examples, and we’ve all seen it a hundred times or more. A little bit Disney, a little bit Kesey, it’s counterculture schmaltz, cathartic and gloopy, uplifting and syrupy and goshdarnit, we love its obvious feel good nonsensicality.

So imagine my surprise upon encountering The Smurfs. For this film delivers an entirely different moral.

In the film, which is essentially Enchanted with little blue people, our real-world male lead is Neil Patrick Gorgeous who, along with his wife, possum-eyed OCD-Glee queen Jayma Mays, forms one half of a critical mass of human cute. 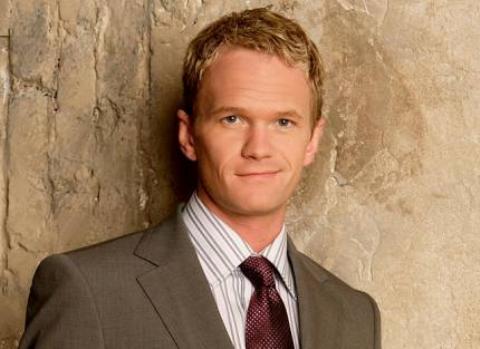 What? Every straight man is allowed one same-sex crush. It’s normal and healthy. I mean, come on, he’s so cool and… dreamy!

Neil Patrick portrays, um, Patrick the archetypal under-appreciated, over-worked, harried, hemmed-in, white collar wage slave. As the film opens he is promoted to Head of Marketing for a perfume company. This is because his predecessor has just been summarily fired by their boss, Odile, for giving her ‘what I want, not what I need!’

Odile is the odious, power dressed, psychopathic, vain, hateful, mega-spoilt superbitch we all love to hate. She could have stepped straight out of Horrible Bosses. She’s Cruella de Ville in Gucci.

This perfumed plutocrat rules her company through fear, makes people dance to her whim, hires and fires with nary a thought for the consequences. Disregarding loyalty, humanity and common decency in her quest for profit, she is greedy and ruthless. For Smurf’s sake she even makes an alliance with the EVIL WIZARD who plans to LIQUEFY SMURFS, just so she can sell some better beauty products!

As poor Patrick struggles to produce a show-stopping ad campaign for her new perfume in 48 hours, working through the night while beset by little blue monsters and being caught in the beams of pregnant Jayma’s incredible eyes, we, the audience, eagerly anticipate the way in which the Smurfs will help poor Patrick show his boss what’s what, the moment when he stands up for himself and she accidentally topples into a vat of rendering fat and splutters her way off-screen left, bedraggled, befuddled and broken, an example of what happens to people who get too far up themselves.

So Patrick comes up with an ad campaign he likes – it’s a generic moon on water riff, hardly a toot-sweet – but he decides to play it safe and send in an airbrushed model shot instead. Yes, our hero finds sending in a slightly less generic generic ad to his boss too much of a rebellion to stomach. He’s that wet.  But – shock! horror! –  Clumsy Smurf accidentally sends the moon-on-water shot to the ad agency instead.

We all know how this is going to play out – Odile’s going to flip, Patrick’s going to realise what a monster she is, and he’ll follow his dream, whatever that turns out to be.

Because, as we all know, it’s A Rule that the downbeaten hero must have some secret yearning, a star they want to hitch their wagon to. They must be secretly eccentric, subtly genius, full to bursting with bushel-concealed brilliance. They must possess an idea, scheme, plan or invention that will make their fortunes if only they can Believe In Themselves and take a chance.

But, um, that’s not what happens.

Because Patrick has no interior life. No dream. No secret hidden talent. His eccentricity is, um, playing Rock Band (or whatever it is) in a t-shirt while Jayma stares at him adoringly. His dream is to produce a slightly better ad campaign and make the odious Odile slightly richer.

And, in a stunning subversion of cliché, that’s exactly what happens – The Smurfs turn the moon blue, which everyone thinks is a publicity stunt Patrick’s arranged to tie in with his generic moon reflection ad campaign, and he gets to keep his job.

You’re not dreaming, you read that right. His dream is to be a good ad exec for a MONSTER, and to not get fired from a job that will make him a stranger to his wife and children while driving him straight to stress-induced heart disease.

The life lesson he takes away from the film, the moment of revelation that the closing scene grants him, is not to try for a bigger house. Yup, he realises he’s happy in the pokey little flat he currently inhabits and abandons his dream of a flat big enough for his kid to run around in. Even the traditional conservative aspirational American dream of a house in the burbs is denied him as he learns to be happy with the soul-crushing, ambition-free corporate tread mill on which he finds himself running.

He knows his place, he’s happy there, and the film encourages us to be happy for him.

And Odile’s comeuppance for her megalomania? A successful product launch and a round of applause from the cat-faced surgery survivor previously known as Joan Rivers (although I suspect her inclusion at a beauty product launch was a sly joke at her expense that she may not have been in on.)

And as the credits roll I’m sitting next to my little girl biting back a scream of ‘now hold on just one fucking second… WHAT JUST HAPPENED?’

The message of the film seems to be that if you keep your head down, get lucky, work all the hours God sends, go without sleep, and neglect your pregnant wife (who will be completely supportive because, gosh, she knows her place) then maybe you too can work for an evil corporation or ruthless psycho entrepreneur and not get fired, kicked to kerb without health insurance, and made homeless whereupon you will have to beg for crumbs with all the other malcontents who tried to be a little bit different.

The subtext of this film is pure, 24 carat corporate conformity. It’s a kid’s movie for a Tea Party mid-west audience for whom political faith has replaced reason and debate. It’s the kind of kid’s film they’d have shown in Stepford.

Now, there are ironies here, the most pungent being that the hero husband, soon-to-be father, breadwinner and all-round role model for down-beaten corporate whores is played by an out, married, gay man who’s just had twins. I mean, he’d be tarred and feathered in the heartland which would most appreciate the cultural values this film espouses. And Neil’s no thickie, I can imagine him chuckling at that, in a Horrible stylee. But still, dude, were you so desperate to be in a movie? Couldn’t you find something better?

As America lurches to the right, as Rick Perry starts to look like a contender, as recession bites and just surviving starts to seem like a noble fight, Hollywood, which has always been worried about any film that won’t play in Idaho, has responded with a family film that preaches a brand of right wing sausage-factory uniformity that makes even the saccharine excesses of Disney’s prim princess golden age seem positively revolutionary.

Yeah, Ariel threw everything away to chase after some bloke just, y’know, because, but at least she stood up for her right to be a pretty trophy wife to a vacant social parasite who had only his looks to recommend him – that took some small amount of self-determination, a vanishingly tiny smidgen of will-to-power.

If The Little Mermaid had been written by the people who wrote The Smurfs, Ursula would have married the Prince, and Ariel would have seen the error of her ways and gone back to her finkelgrubers.

The thing is, though, the reason I’m penning this rant, is that I see the glimmerings of an emerging trend, and it bugs me. I could just as easily have written an equally long piece about the shameful, luddite, faith-based anti-science message of Tinkerbell and the Great Fairy Rescue.

But I’d best not get started on that, or we’d be here all bloody night, and anyway I can’t get into it now – I have to get eight hours work in before dawn.