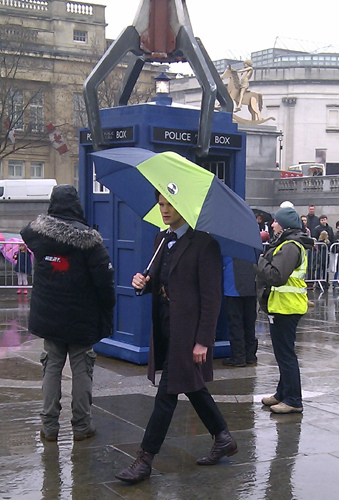 Picture the scene… I’m standing in Trafalgar Square watching them film the Doctor Who 50th Anniversary Special. I’m standing behind a barrier watching Matt Smith and Jenna-Louise Coleman filming a scene. There are other members of the public here taking pics and a good-natured, smiley guard on the opposite side of the barrier to make sure we don’t get in the way.

One of the crew comes up to the guard and tells him that some paparazzi are being aggressive to members of the public by the steps to The National Gallery. Smiley guard goes  with police officer to tell them off – there are children here, after all. Result: the paps come and stand on either side of me. They talk over my head.

Here is an exact transcript of their conversation, with no addition or embellishment: Pap 2: The bird’s nice looking though.

Smiley guard: (Smiling) Well, your photos aren’t gonna be worth nothing once this lot have put theirs up on Twitter. (Wanders off smiling).

One-nil to smiley guard, I reckon.

Meanwhile, in front of us, Matt Smith earned his wages like nobody’s business. Don’t believe me? Check this out!