In the mid 90s I focused an awful lot of energy on breaking into comics. My success was limited, to say the least – one comic published; one commissioned, finished and paid for but never published; one important life lesson. 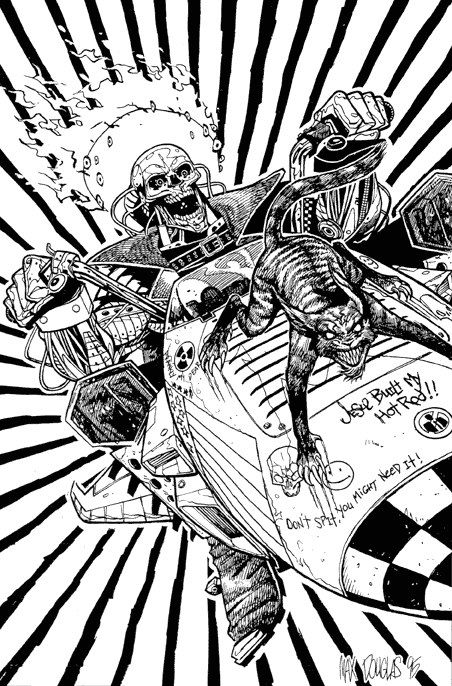 In 1995 Marvel Comics commissioned me and my mate Sam Salgood to produce an issue of Ghost Rider 2099. I don’t remember much about the setup of the book, but basically there was a big cyborg guy who faced off against an evil corporation called D’monix each month. There was a lot of cyberspace stuff, too. It was all very William Gibson.

I rattled off a script and gave it to Sam, who’d worked for Marvel before on Clive Barker’s Saint Sinner as Max Douglas. Sam drew all 22 pages plus a terrific cover. We were both paid in full and I sat back and waited for my first book to hit the stands.

A few weeks later all the 2099 books were cancelled as part of what was called The Marvelution. Our GR-2099 issue never saw publication. Sam kindly agreed to letter it according to my script and between us we produced a finished copy in black and white, but with no-one to publish it the story languished in our drawers as a piece of file work to show editors what we could do.

When I look at it now there are parts of it that really make me wince, especially the first four pages, but I think the overall story is sound, and Max conjured some good visual storytelling. It also mucks around with time a bit, something I don’t think entirely comes off, but I was keen to try out the technique.

Anyway, the chances of it ever being published are slightly less than zero, in fact I doubt Marvel even have a copy of this story on file anywhere anymore, so I figured I may as well put the whole thing up on my site as part of my portfolio. I’m aware that I’m probably being very naughty but hey, where’s the harm? If anyone official asks me to remove it I will.

Raven Chronicles: Leader of the Pack

To date the only comic book of mine to see print was issue 13 Caliber Comics‘ Raven Chronicles in October 1996. The art was by Laurence Campbell, who was just starting out on what has turned out to be a glittering career.

A production problem resulted in a confusing finale – when the relationship between two characters changed from father/daughter to brother/sister within three pages – but apart from that I was pleased with the book. It’s never been collected, so it’s hard to find.