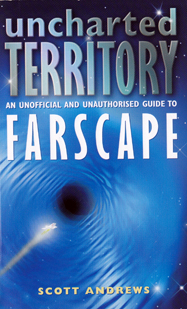 You can read this book online – it was serialised, and expanded to include Season Four and The Peacekeeper Wars, on Tor.com.

Flung through a wormhole while testing a new theory of space travel, John Crichton arrives in a universe that no amount of sci-fi could have prepared him for. He soon finds himself on a living ship crewed by escaped convicts, on the run from a variety of madmen and desperately trying to remain sane.

This book comprises an in-depth, unofficial episode-by-episode guide, including categories such as “Buck Rogers Redux”, “Nosferatu in Rubber”, “Alien Encounters” and “Get Frelled”. Covering the first three seasons of the show, it also provides a look at the logic leaps, the spins the show puts on classic storylines, and behind-the-scenes information.

Extra – Farscape: What TV Was Invented For – a cover article  I wrote for Starburst #278 in October 2001 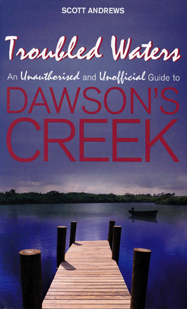 Capeside – where the sun always shines and there’s always some hot gossip. And where Dawson, Joey, Pacey and Jen – and their friends, families, lives and loves – have long been captivating viewers and building audiences around the globe.

As well as a full, up-to-date and complete overview of all four seasons, this newest Virgin Programme guide contains an episode-by-episode look with categories such as The Ballad of Dawson and Joey (and Pacey), School Sucks!, All Things Freud and Kiss and Tell.

This unofficial and essential guide also looks at the characters and the spin-offs – and fills in the world around the show. Whether you’re a seasoned fan, or a converted newcomer, Troubled Waters is your completely indispensable guide to the world of Dawson Leery and his friends.

Most of the magazines and sites I wrote for are now defunct, so I sometimes post old articles here.

(If you really want to delve into this stuff, I used to list it pretty fully on my old site, which is archived here.)