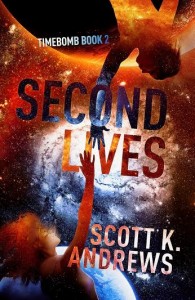 Jana, Kaz and Dora have escaped from their mysterious enemy, Quil, wounded and scared. Taking refuge in a place outside of time, they devise a plan to change the past, altering Quil’s life so that she never meets them. From the streets of Beirut in 2010 to the domed cities of Mars in 2155 and beyond, the three teenagers fight for their future, and that of all humanity, by trying to rewrite the history of the person who has sworn to destroy them.

What could be more complicated – and important – than trying to save the world? As their feelings for each other grow stronger, though, Jana, Kaz and Dora find themselves at the centre of a different kind of battle. And when it comes to matters of the heart, there can be no real victors.*

And there are risks to tampering with established events… timelines become snarled, histories become tangled… and one false move could destroy time itself!

‘Likeably spiky characters, fun paradox shenanigans and a cracker of a cliffhanger’ – SFX on TimeBomb

* despite how it may sound, I promise solemnly there will NOT be a cheesy love triangle between Kaz, Jana and Dora. Honest.