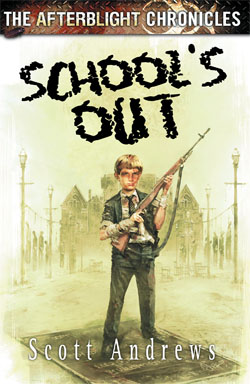 Abaddon Books is proud to announce that  it has struck a deal with Multistory Films to bring School’s Out by Scott Andrews to the big screen.

Attack the Block meets Lord of the Flies in a post-apocalyptic landscape where pupils at a public school grow up fast or they don’t grow up at all, School’s Out is one of the standout titles from Abaddon’s successful Afterblight Chronicles series.

The books follows the final days of St Mark’s School for Boys; and when your teachers are killing each other, the prefect is experimenting with crucifixion, and the rival gang from across town has decided that ritualistic cannibalism is the way to go, spots and BO don’t seem like such big problems any more.

Jonathan Oliver, editor-in-chief of Abaddon Books, said:“We’re delighted that the quality of Scott’s work on School’s Out has been recognised – it’s a great novel and a cracking read that never lets up. With teenagers facing insurmountable odds in TV series like Misfits and films such as Attack the Block, the time when teens save the world is nigh!”

Jason Kingsley, CEO of Rebellion, said:“Whereas much post-apocalyptic fiction focuses on the bleak, The Afterblight Chronicles is made for the silver screen: action, big set pieces, strong characters and a killer concept.  Abaddon’s status as an ideas factory is now well established – our medieval zombie novel Stronghold was optioned earlier this year and this is yet another property that’s been snapped up by a film company.”

Emma Biggins, producer and MD of Multistory Films, said:“We are thrilled to begin development on School’s Out. The book presents a perfect opportunity to create a high-octane action movie with depth, intelligence and wit. As a new production company we are extremely excited to be collaborating with a company as successful and renowned as Rebellion.”